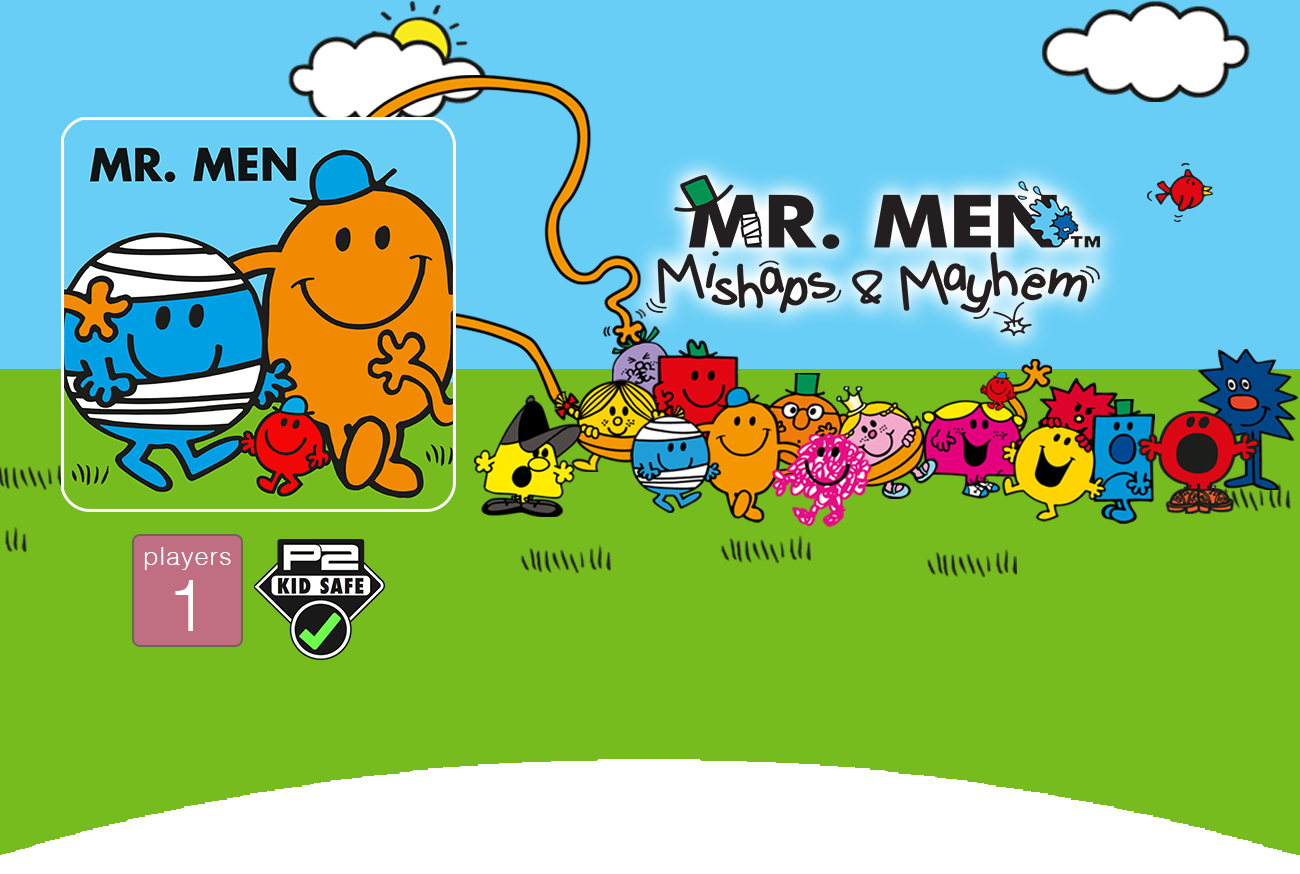 MR. MEN: MISHAPS & MAYHEM app is a fun, fast and funny, action-packed collection of games based on the much-loved Mr. Men™ and Little Miss™ characters from the popular book and TV series.

On entering the app, the player must play through a wide range of fastmoving games back-to-back. The difficulty level increases as the player progresses through all the games, becoming more and more frantic until the player loses all of their lives.

As well as completing as many of the games as possible before they run out of lives, the aim is for the player to both beat their own high score and compete to become Top Player on the overall high score table.

There are two versions of the game in circulation. A Free version with In-App Purchases and a Paid Version.

The Free version of the app has 3 games to play straight away plus 12 more available to buy. With this version it is possible to play with 15 characters.

The Paid version of the app has 5 games to play straight away with another 5 to unlock through play.

To get the best enjoyment from the app always make sure your version of Mishaps & Mayhem is up to date. As updates become available they can be downloaded for free from the store you originally purchased the app from. 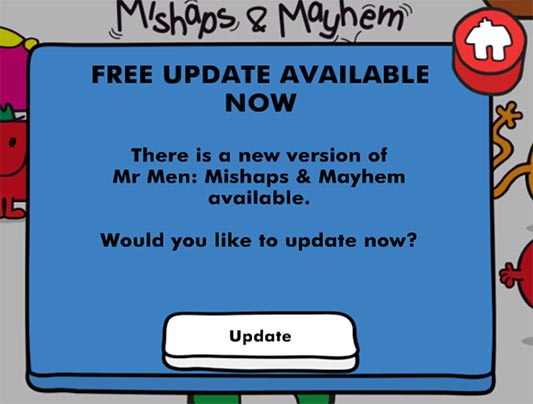 The app will alert you when an update has been made. Press the Update button and follow the instructions to get the latest version. If you'd prefer not to update at this time, just close the alert by pressing the

HOME SCREEN
When you load the app you will be presented with the Home Screen. There are two versions depending on which version of the app you have. 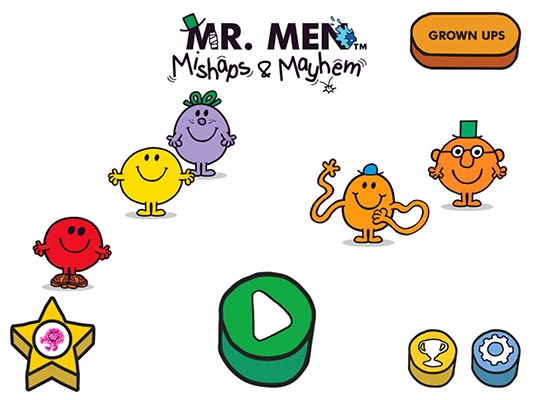 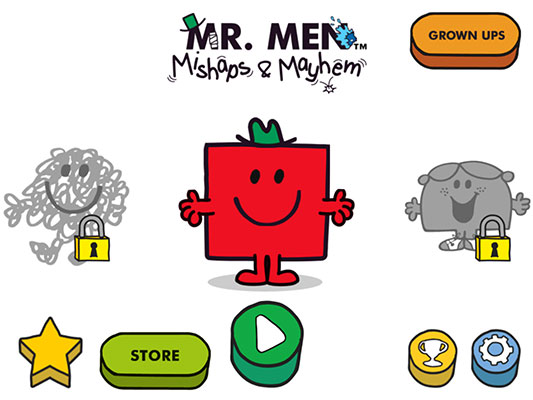 
You can also choose to return to this screen by pressing the Home Button whenever it appears in the app.

SETTINGS BUTTON - Press to switch the music and/or sound off and on, view the credits or change the language from English to French, or vice versa.

GROWN UPS BUTTON - Press to view all the functions in the Grown Ups area.

The STORE BUTTON is only shown if you have the Free version of the app. Tap on it to see all the exciting extra content to buy.

Touch the characters on screen to see what they do!

MY COLLECTION SCREEN
Depending on which version of the app you have you will see one of the two screens shown below. Both operate in a similar way. Characters shown in colour are unlocked and ready for play immediately. Greyed out characters without a padlock will be unlocked by playing the game and collecting more stars. Greyed out characters shown with a padlock are available for purchase from the store (Free Version only). 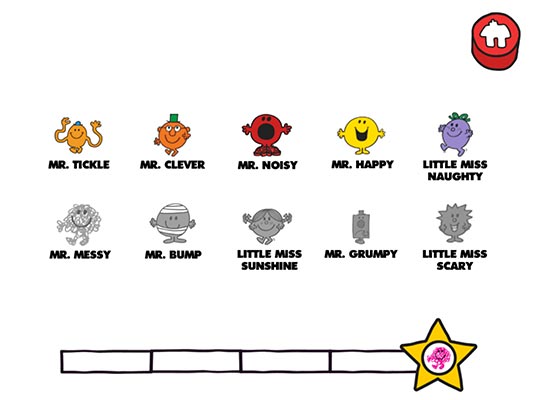 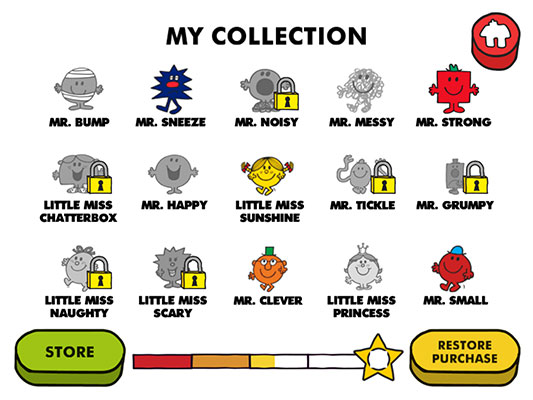 
STAR GAUGE - this shows progress to unlock the next game. The image of the character in the star is the next character to be unlocked.

HOME BUTTON - Press to return to the home screen.

LEADER BOARD SCREEN
To view the Leader Boards, you must be logged into the relevant gaming network. Don't worry, if you'd prefer not to connect that's fine, the game will still function without.

There are 2 Leader Boards available - Global & Friends. To move from one to the other press the arrow keys.

This shows your position when compared with all the players playing the app. 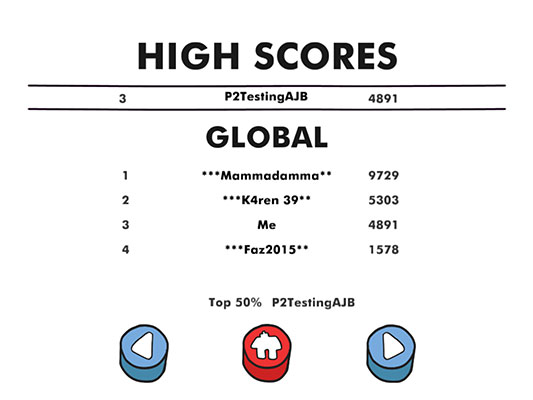 This shows your position when just compared with the players that are your friends in the relevant social gaming network. 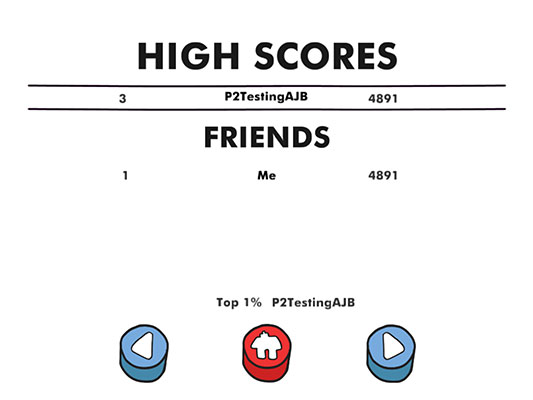 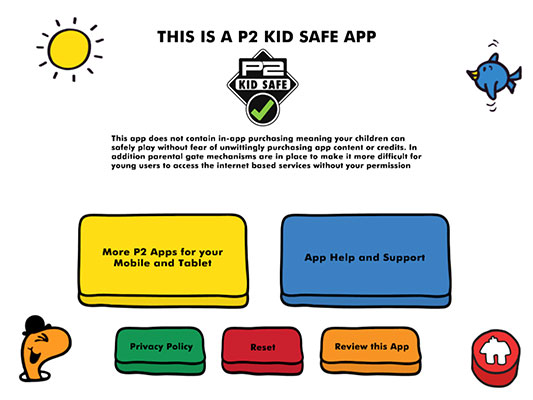 More P2 apps - Tap this to see all the other great Gaming Apps we have available for mobile and tablet devices.

Review this App - If you love the game, why not tell others by leaving a positive review on the AppStore. Certain stores only.

Reset - Use this to reset the score back to zero and to lock all the characters/games again part from the 5 that were open from the start. This will not affect any high score you may have registered with a social gaming service. In the Free version of the App this button will Reset High Scores only to ensure you retain your extra purchases.

THE GAMES (Paid Version)
If you have the paid version of the app 5 games will be available to play at the start of the game with another 5 to unlock as you play and accumulate stars. The games are as follows:

Mr. Clever: Read all about it!

The 5 additional games that can be unlocked through play are:

THE GAMES (Free Version)
If you have the free version of the app 3 games will be available to play at the start of the game with another 12 available to purchase from the on-line store. The games are as follows:

Mr. Clever: Read all about it!


Playing the Games
When the player starts to play the games, one of the unlocked games is selected at random from the pool and presented to the player. When a new game is unlocked, it is simply added to the pool of available games to play.

Remember for a game to be in play it will be shown in colour.

To succeed, the player must complete each game's task within the time limit. If they fail they lose a life.

When a game is over, the next game is selected at random for the player to play. The player must successfully complete 3 games to move up a difficulty level. 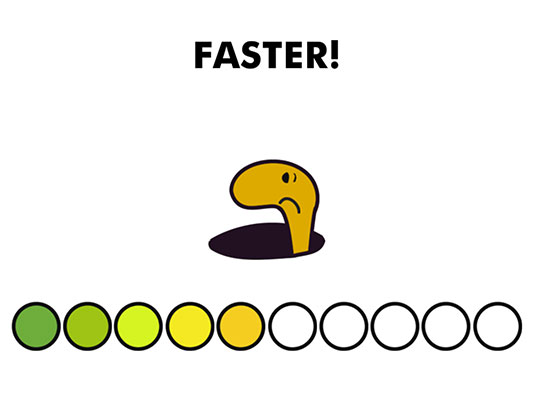 If the player successfully completes the round of three selected games, they will see a "Faster" screen and the pool will be re-populated in a random order before play begins again. At this point, the difficulty level of the games increases and the game time limit will be reduced.

The player continues to play with the difficulty level increasing on completion of each round of three games until they lose all their three lives.

Press this button to pause the game. 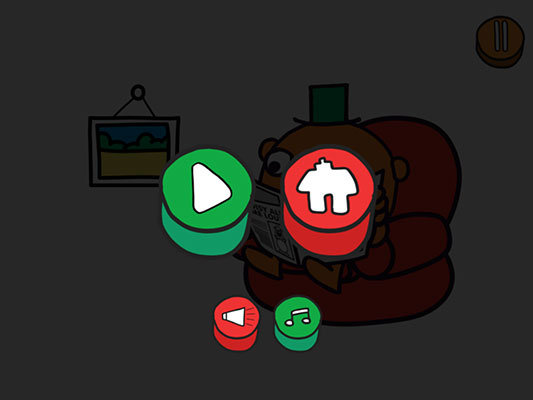 PLAY BUTTON - Press to continue playing the game where you left off.

HOME BUTTON - Press to return to the home screen.

SFX BUTTON - Press to switch off all the sound effects.

MUSIC BUTTON - Press to switch off the music.

RESTORE PURCHASE - This function is available in the Free version only and will allow you to restore any purchases you have made if required.

LIVES GAUGE - The number of lives the player has is displayed after each round. The worms disappear down the hole when a life is lost.

Success
At the end of each game if the player has successfully completed the task, they see the success screen. 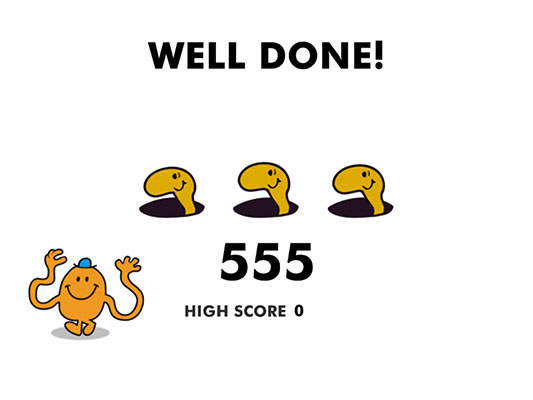 High Score is the highest score the player has achieved.

Life Lost
When the player has not completed the task within the time limit, they are shown the life being lost together with their score. 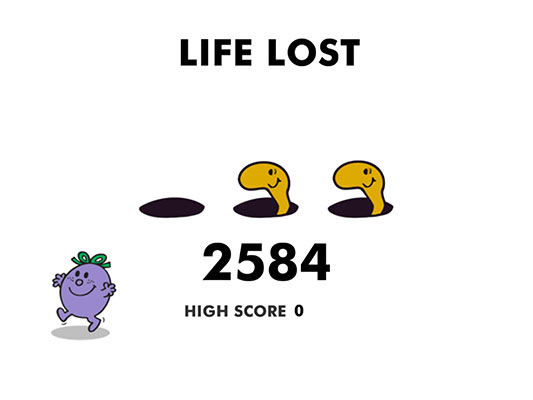 Game Over
This is shown when the player has lost all 3 lives. 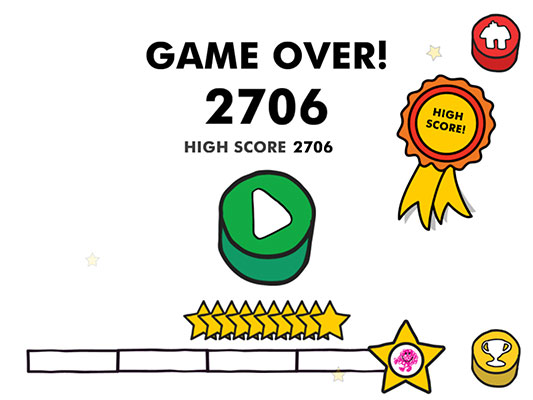 The stars the player has won are shown here. Pressing any button on the screen adds the stars earned to the star gauge.

PLAY BUTTON - Press play to start playing the games again or if you have completely filled the star gauge, to take you to the home screen to see the character you have unlocked.

HOME BUTTON - Press to go back to the home screen.


Unlocking a Game
To unlock a new game, the player earns stars by successfully completing games. When the player has earned enough stars, a new character and therefore a new game is unlocked. This character will now appear in colour on the Character Unlock Screen.

When a character is unlocked you will see them added to the Home Screen. 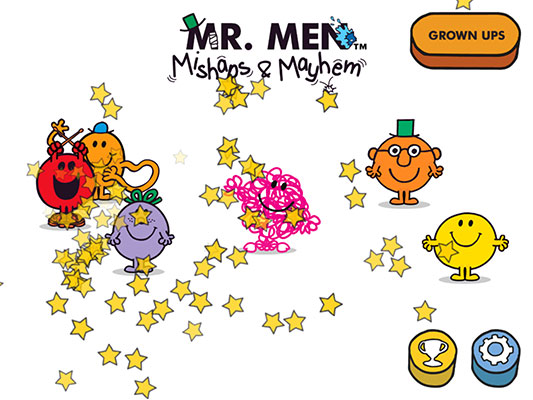 PURCHASING A GAME OR PACK
To purchase extra games press the Store button and make your selection. Purchases cannot be made until you sign in to your Store account and validate your credentials.

HOW TO PLAY THE GAMES
Each game is based on a favourite Mr. Men™ or Little Miss™ Character. Some of them are up to mischief and other just seem to attract trouble! 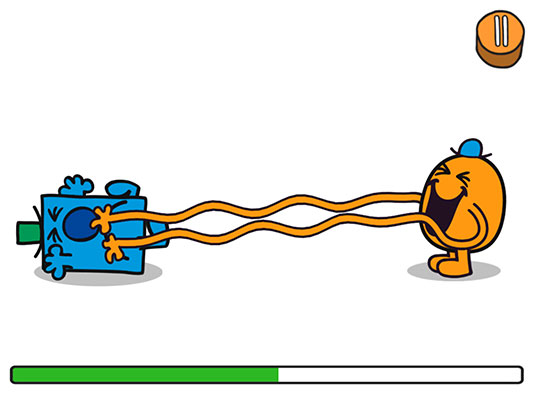 Mr. Clever: Read all about it!
Mr. Clever is reading the newspaper. Work out the word from the letters placed on the screen. Be quick before the timer runs out. 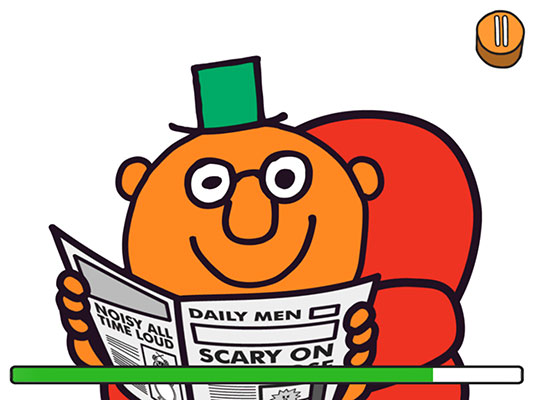 Mr. Happy: Hold tight!
Mr. Happy is on the rollercoaster eating popcorn! As he goes through the loops, the popcorn keeps falling out of the box. Flick the popcorn back into the box as quickly as you can. 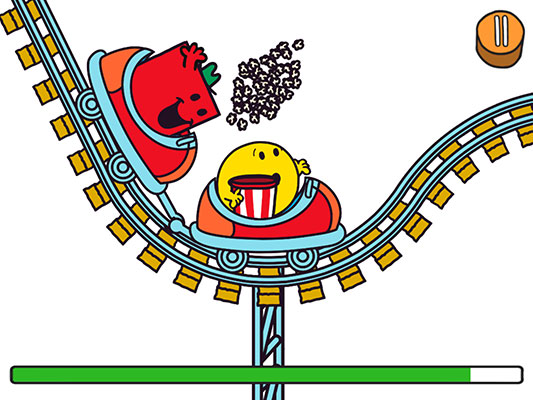 Mr. Noisy: What a racket!
Mr. Noisy loves making a noise. Bash the drums and cymbals to create lots of noise and fill the 'noise-o-meter' to win the game. 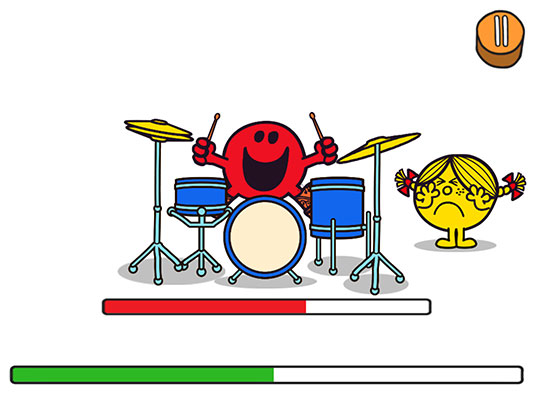 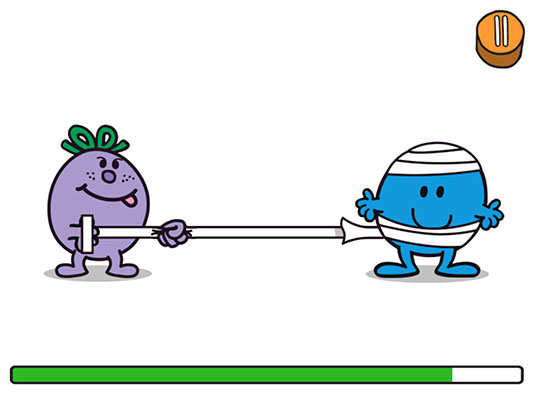 Mr. Messy: Don't mess up!
Mr. Messy is making a cake. Move the wooden spoon side to side and stir the ingredients to make the cake mixture before the timer runs out. 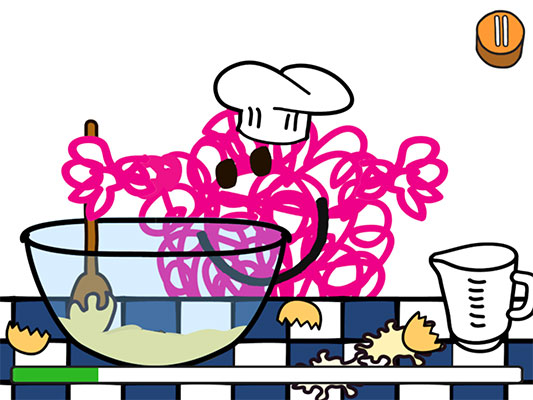 Mr. Bump: Watch out, banana skin!
Mr. Bump is out walking. Several obstacles appear. Help Mr. Bump avoid the obstacles by swiping up / down on the screen until the timer runs out. 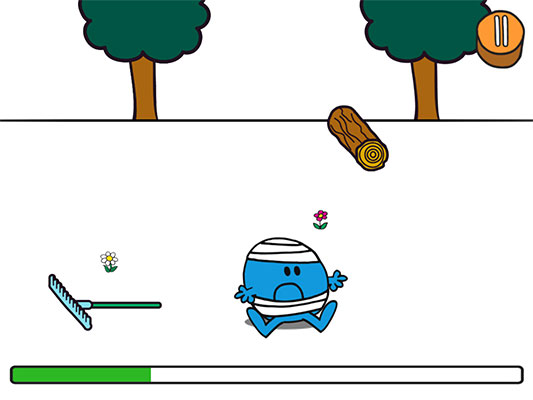 Little Miss Sunshine: Tangle teaser!
Little Miss Sunshine is ready to do some skipping. Tap when her face is in the green section on the top bar to jump at the correct time and avoid becoming tangled with the rope. Skip until the timer runs out. 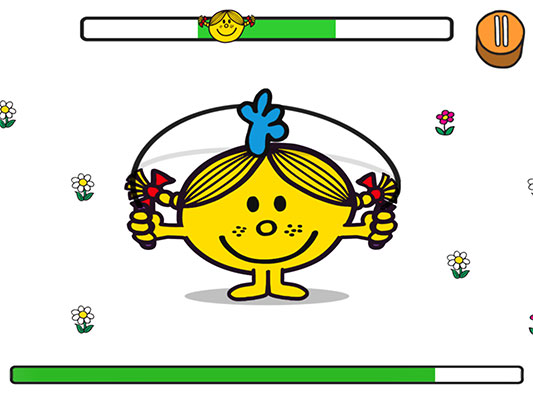 Mr. Grumpy: Ready, Steady, Splat!
Mr. Grumpy is sunbathing. Little Miss Naughty appears with a Water Balloon in her hand. Tap and hold, to create a trajectory line, and release when the end of the line is above Mr. Grumpy to throw the water bomb. 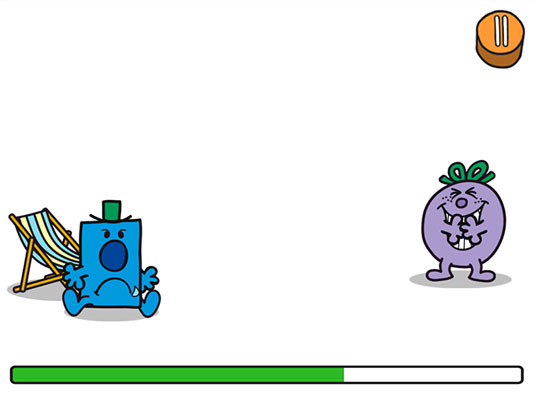 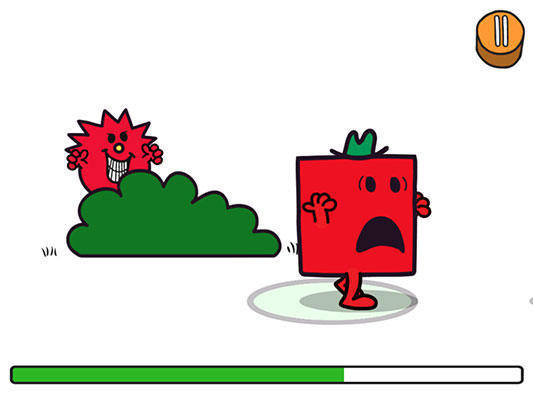 Mr. Strong: Breakfast Time!
With a busy day ahead Mr. Strong needs lots of energy. Transfer the eggs into the egg-cups as quickly as you can. 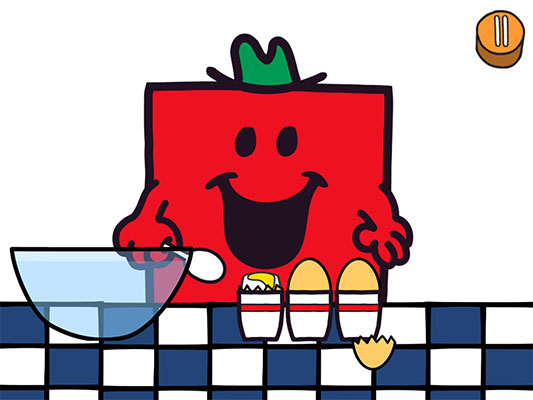 Mr. Sneeze: Atishoo
Use the handkerchief to wipe the screen clean as quickly as you can. 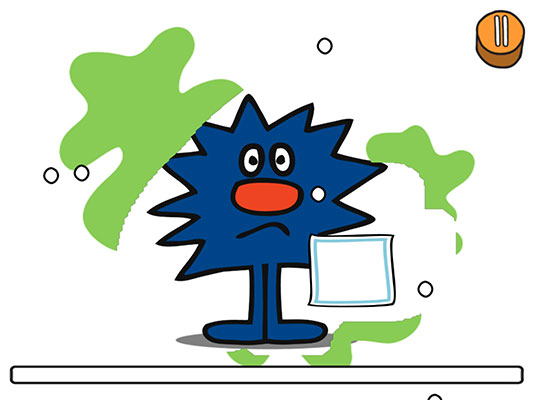